It feels like ten years since I’ve posted something. In fact, it’s been two months. That’s not too bad if you think of this blog as monthly, a little worse if you know I was going for bi-weekly (or even weekly, a ludicrous plan). In any case, what happened? Thanksgiving, Christmas, New Years, the holiday gauntlet: more food and alcohol than anyone would care to see – laid out on a long table, as a cold, objective accusation – and a few thousand miles of driving. Now I’m back – back to work, and work – and it’s story time again,

But, first, some brief news.

-I’ve got a ‘project’ out to editors as we speak. I suppose discretion is best here, but I can say this: I’m halfway through a strange month.

-Exploding Math Lab, the very loud band I’m playing guitar for, had a listening party the other night (by which I mean a few dudes standing around in a living room). After finishing mastering, and re-mastering, we’re beginning to sound an awful lot like a real rock’n’roll band. We’ve even got a CD to give out. A physical CD! Only about ten years after physical CDs went out of style. But still, we’re pretty excited. Check us out on Facebook (don’t worry, we’re the only Exploding Math Lab out there). We should be posting some of the mastered clips really soon. Next steps: full album, world tour, catastrophic substance abuse, creative differences, tragic and mysterious death(s), cooling off period, heating up period, reunion rumors, reunion denials, actual reunion, comeback album, world flooded by melted icecaps (except for the upper half of Billionaire’s row on Central Park South).

-Those two short stories really are coming, I promise. “Mystery” – the lovechild of Chuck Palahniuk and Garrison Keillor – goes live at John Hopkin’s T.J. Eckleburg Review on February 2nd. It’s part of their ‘Salon’ series, so you’ll have the opportunity to publicly ridicule me or to make a long series of protracted inside jokes with me in their discussion forum. Yeah? Yeah. “A Prayer For War” goes live at Bloodstone Review, very soon. It’ll be worth the wait. Seriously. It was good enough, after all, to convince the very thoughtful and aesthetically discriminating editors to publish it, even though I used the phrase “motherfucking motherfucker.” Twice. Sorry Mom.

For a lot of reasons, I’m particularly struck by the ten-year span. It shows up my work, all the time, because it shows up in my life, all the time. I often think the gods dole out their rewards and punishments in deep, Homeric allotments. I also feel that karma has a ten year transit, and that trauma takes a good ten years to come to the surface. And, it’s also just a strangely firm anchoring point, in a sea of memories that slip away as soon as you try to grapple with them.

Recently, at the restaurant, we were given a new chef. If that sounds awkward, it’s meant to. It’s been a difficult transition and – since last year’s Tobin debacle – things have been tense. Our new chef is not a bad guy, he’s knowledgeable and hard-working (the opposite of Tobin, who’s equine corpse I’ll kick till Kingdom come). I like him enough not to use his real name here. Still, the situation is a bag of shit. You can write whatever you want on the bag of shit, but there is no eloquence, no articulation, that can perform alchemy. That’s no bag of gold we’ve been left holding.

And, in spite of this, our new chef comes to the holiday party, with his wife, ready to have some* drinks and take some ribbing. I go with my wife, promising to leave after a few** drinks, but eager to blow off some steam, and see my friends from work without the 120’F heat or the threat of burns, cuts, and lower-back injuries.

And, yes, I’m going somewhere with this.

At a certain point in the night, our new chef introduces himself and his wife to me and my own wife. My wife and I stop cold. We already know the chef’s wife. Then we’re laughing, the three of us – the chef standing off to the side, confused – hugging and cursing in surprise, the way you do when you run into someone who knew you at a certain time in your life, someone who will, no doubt, have deeply compromising stories to tell about you . I slap the chef on the shoulder and say, ‘I have known your wife for a really, really long time.’ And the next day, it occurrs to me just how creepy that must have sounded, and I eventually find a (somewhat) tactful way of clearing up the lingering implications. But I had known her for a long time, or rather, I’d known her a long time ago.

This was before I’d gotten married, gone to New York, before graduate school. I was just out of college, occasionally mohawked and always savagely drunk. I was in a punk band, living off stolen food from restaurant gigs.I  would eventually become the kitchen manager, and pull my shit together a little bit, but not a lot; even after I got the KM job, the veggie crisper in my fridge was full of beer. Not cans of beer. Beer. I’d ladle my coffee mug in there for breakfast.

And of course, there were drugs. But that’s a story for another time (February?).

Now, I have a memory, from that time, one of the few really clear ones: It’s near two in the morning, and I’m drunk, and a little high. We’re the last band playing and a lot of the crowd has left, but there’s about a dozen people, pressed up against the stage. We’re playing our last song. Our singer, stripped to the waist, a trickle of blood on his neck and chest, beer soaked shorts, is singing into the microphone, ‘this one’s for you, this one’s for you.’ And right up front, three or four people, that I knew but not well, they start crying. Weeping, openly, tears running down their faces.

And I was new to the band, I hadn’t helped write the song and I didn’t even know what it was about – I didn’t even know all the notes, I was the bassist and I could fake about half of it – so I couldn’t do anything but play along, suddenly more of a spectator than the people in the crowd. They were more a part of the band, more a part of what was happening at that moment than I was then or would ever be. And that was okay. It was beautiful and I was grateful. It could have been the whiskey and the cocaine, but I my eyes teared up, and I threw my hair in front of my face and kept playing.

I had, right then, the idea for a story, not the whole thing, not a novel-sized epiphany. But I knew what I wanted to write about, and I went home that night, wired and drunk, and wrote until the sun came up and I stumbled into the kitchen for a mug of beer. That was me, ten years ago.

And that’s the thing. When I have that memory, when I summon it, or when it summons itself, unbidden, just showing up in the middle of some other thought like an emergency broadcast from the past, I see myself on that stage. And it’s me. Which is to say, it’s me now, with my grad school objectivity, my post-modern referentiality, thirty years of scars and book learning, a hot heart with cold aesthetics. But then? Ten years ago? Who was that guy? Joan Didion put it nicely, “I have already lost touch with a couple of people I used to be.”

The day after the holiday party, the chef tells me how wild it was, us all knowing each other. I don’t nit-pick the nuances of ‘us;’ it feels like an honest gesture. He tells me his wife went home, riffling through stacks of old photographs, looking to see if she can find a photo of me. Ten years ago, in 2005, we all had cell-phones but I can’t remember any of them having a camera. After a while, she gave up. The chef tells me, ‘my wife says it’s too bad, she’s says it’s funny, says Ben was just a baby.’

I also went home and dug around. Turns out, I do have one photo of myself at that time. I don’t remember when it was, exactly, or which shithole club it was in. It’s a low-res shot, probably taken by the sound guy. I’ve got wet hair – a whore bath after working a shift, likely – and a t-shirt I’d stolen from my roommate that says Fuck You You Fucking Fuck. So it could have been any day of the week. 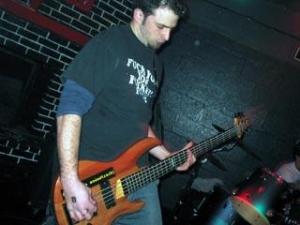 It’s clear: the guy in this picture is just a baby. A clammy, chubby-faced, sweaty-drunk baby. Smart, maybe, but surely not wise, strung out but with no clue what ‘tired’ means. I was not even close to having earned my cynicism. I think I know this guy, I think I love him sometimes, and sometimes he scares the shit out of me. Sometimes he embarrasses me and sometimes I’m so proud. He is and he isn’t me. I’m sure he felt that way about the teenager he used to be. I’m sure in ten years someone will feel that way about me.

Coming in February: Short Work, rock’n’roll, new projects, and 12 great ideas on how to massacre your enemies of Valentine’s Day.